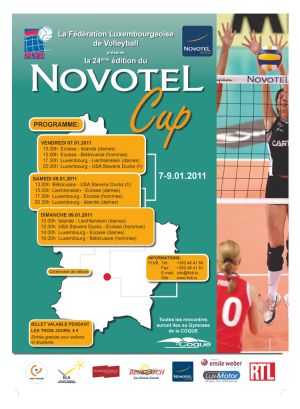 It is about time. The 24th edition of the prestigious and traditional Novotel-Cup starts today along with the first anniversary of the new FLVB website.

Please kindly note that the following matches will be transmitted LIVE on simba.lu:

The second match for the host country: Luxembourg against the unknown American college team, the USA Stevens Ducks.

The coach of the Luxembougish National team in the Men's category, Burkhard Disch, trusted Lentz, Lux, Belhaouci, Laevaert, Vosahlo and Jungers as starting six as well as Husi as libero. An effective attack and a clever pass distribution led to a quickly lead. Despite the good defense of the American team, Luxembourg was able to keep and slowly extend its lead. The good communciation and ambience within the Luxembourgish team wowed the crowd. Both teams delivered Volleyball on a high level. In the end, Luxembourg could decide the first round at 25:18. Second set, same match, similar result. Luxembourg did not stop putting pressure on its attack and could also win the second set, gaining a 2:0 lead in sets. Even though the opponents from the other continent tried all in the last set to turn the tide, they also lost the third set with a score under 20.

The first match of the Luxembourgish National Women team should have been a more clearly victory for the home team. Liechtenstein could not build on its complete team - only eight players - but fought until the end. In the first set, Luxembourg quickly gained a small lead which the host team could extend until the final score of 25:15. During the beginning of the second set, however, it seemed as a totally different home team had entered the court. Failures in reception and defense led to a score of 8:0 against Luxembourg, when the referee announced the first technical timeout. Following a good block behaviour, Luxembourg came back into play and reduced step by step the great difference. Notwithstanding several personal changes during the set, Luxembourg. nevertheless, could not balance and lost the set 23:25 after a failure in attack.

The third set started well for the host team. Despite the insufficient Luxembourgish reception, the lions could go into the first technical timeout with a two-point lead. However, Liechtenstein did not give up and infused the audience with a spectacular defense. Close to the end of the set a neck-and-neck race started: 18:18, 19:19, 20:20. Luxembourg could win two points in a row: 22:20. Finally and above all due to strong attacks by Isabelle Frisch, Luxembourg could win the third set to 20. The fourth set started even better for the home team. Good services by diagonal player Betty Hoffmann and a well working block behaviour led to a secure lead at 20:10. Due to miscommunication and lack of concentration, a long changing procedure on the Liechtensteiner side and confusion with respect to the Luxembourgish formation, the Liechtensteiner player Schadegg reduced the difference in points by effectively serving. In the end, Liechtenstein could balance at 24:24. Fortunately, Luxembourg gained the following two points and therefore the match.

The first match in the male category took place between the Scottish team, which Luxembourg already welcomed the previous year, and Belarus, a newbie. Despite the physical superiority of the Byelorussian Scotland dominated the first set, leading 16:10 at the second technical timout. After the second timeout Belarus could reduce the difference, but was never able to catch up above all due to failure in service and defense. In the last part of the set Scotland again extended the lead, winning 25:16. The more experienced and older Scottish tam also dominated the first phase of the second set. However, the young Byelorussians - all players are below 20 years old - could balance the score at 22:25. The third set was an exciting neck-and-neck race, which the Eastern Europeans could luckily win at 24:26.

The first match in the 2011 edition of the famous Novotel-Cup! As usual the first two Women team started. This year the both Northern European countries Scotland and Iceland faced each other in this first round. After falling two points behind during the first part of the first set, Iceland put more pressure on its service. Scotland started to loose its advance due to a lot of self-caused mistakes. Iceland was able to quickly reduce the difference and to take over the lead, which it lost again at the second technical timeout at 16:15. Afterwards a neck-and-neck race started, which Scotland could finally win at 25:22. In the second set Iceland was able to extend its lead step by step until the final and self-explanatory result of 14:25 for the Icelandic team. The third set started more balanced, with Iceland reaching a small three-point lead, which it could again extend until the final result of 19:25. After winning also the fourth set, Iceland could defend Scotland 3:1.